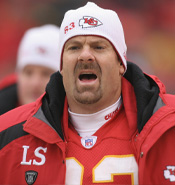 Kendall Gammon is a sought-after keynote speaker with unexpected on-stage presence – a presence that’s quite different than you’d expect from a 15-year NFL veteran known for his physical strength. Drawing on personal life challenges, Kendall delivers a message threaded with vulnerability and uses authentic storytelling to inspire business owners and their teams to use emotional strengths to embrace change, build stronger relationships, and positively impact their own growth and success. (And yes, he also juggles.)

A Kansas native, Kendall attended Division II Pittsburg State University where he was a captain for the 1991 National Champion Gorillas and was voted most inspirational by his teammates. During a fulfilling 15-year career that included 4 years each with the Pittsburgh Steelers and New Orleans Saints, and his final 7 years with the Kansas City Chiefs, Kendall played in the 1995 Super Bowl and a 2005 Pro Bowl. Today, in addition to his speaking engagements, he is recognized for his role as Color Analyst for the Chiefs Radio Network Broadcast team where he broadcasts alongside “Voice of the Chiefs” Mitch Holthus.

Kendall’s challenging life experiences combined with his NFL achievements have created opportunities for him to share his story and help – even save – others. What started as authentic storytelling among friends and colleagues quickly turned into on-stage keynote speeches through which Kendall influences thousands of lives. While he is passionate about his roles as a professional speaker and Color Analyst for the Chiefs Radio Network, Kendall will readily admit that he loves his role as a father even more. When not on the road, Kendall enjoys time with his grown sons, Blaise and Drake.

Kendall is inspiring, entertaining and a bit surprising. As a veteran NFL athlete, you may not expect him to talk openly about vulnerability or to juggle on stage. Here’s a glimpse of Kendall in action.