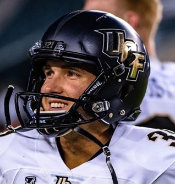 Dylan Barnas as trained with 4th Down University since 2012 during his high school years at Merritt Island high school. Barnas went on to play one year at Mars Hill University in 2015 before transferring to UCF as a walk-on to play from 2017-2019. Over that time, he has won 1 National Championship and 2 AAC Conference championships. During his senior season he went 15 of 17 or 88.2% which is the 2nd best season in UCF history and received All-Conference honors. He is also a 3-time recipient of AAC All-Academic Team.

Barnas graduated with a bachelor’s degree in Marketing in 2019 while at UCF. He is now working as a Financial Advisor with Northwestern Mutual in Orlando, Florida.