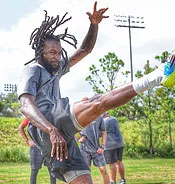 Coach Blanchard is a Lauderdale Lakes, FL native and a graduate of “The Real HU” Hampton University. Blanchard has coached with Dan Lundy for over 10 years. During this time, Blanchard has trained dozens of student-athletes who have punted at the next level. As a student-athlete at Hampton University, Coach Blanchard was 3 time 1stTeam All MEAC, 2 time SBN 1stTeam All-American, and 2 time FCS 2nd Team All-American. Blanchard currently lives in Orlando, FL working as a Lead Front End Web/App Developer.